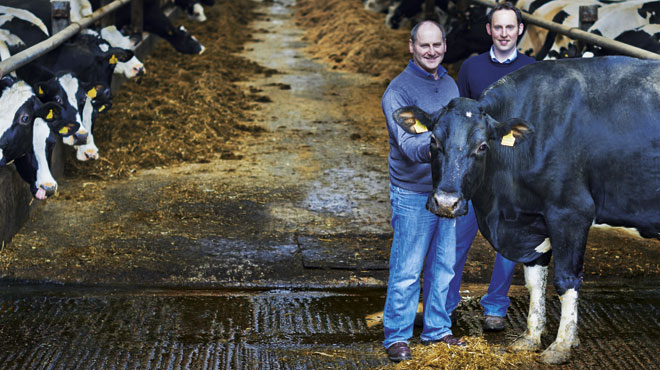 Roger Mason doesn’t do the shopping himself, but his award winning farm in Cumbria is pretty much surrounded by Booths stores. “Kendal, Milnthorpe, Kirkby Lonsdale – we’re smack bang in the middle of them!” he says.

Heaves Farm, where the family milk around 150 Holstein Friesian cattle gloriously situated in the old county of Westmorland. “It’s all rolling hillsides,” says Roger. “We look down over to the Kent estuary and to the viaduct at Arnside. It’s a good place for milk production because of its rainfall – we might be too wet and wild to grow crops, but it’s ideal for growing grass.”

Roger is the fourth generation to farm in this part of Cumbria, though agriculture goes much further back in the family – and it’s going forward, too. “My second Son, Gary, works on the farm and it’s good for him to know we’re working with Booths,” he says. “We’re here to make a living and in the last year or two that’s been very difficult but Booths Milk gives us a chance to move forward and invest in the future. I trust Booths as people to work with.”

Visit our FAQ’s for more information about Booths Milk.

Q: How is the milk is processed?

A: The milk in our cartons is purchased from Muller Wiseman who collects, pasteurises and bottles the milk from their site in Trafford. Our nominated farmers for our milk supply to this site. The milk is consolidated into bulk tanks at Muller Wisemans with other farmers’ milk, this is then bottled into our Booths British Milk containers.

Q: Why is the milk from the farms not separated?

A: If we were to segregate the milk, this would result in increased Co2 emissions and increased production costs, thus eliminating the ability to pay a great

price to farmers without increasing retail prices for the customer. Distribution from just this specific group of farmers would not only be cost prohibitive but not environmentally sound. The fluctuations in demand and supply throughout the seasons are complex and this system enables Booths to guarantee that our farmers can receive the highest price and maintain availability.

For every litre sold in a Booths store over another supermarket, the farmer receives a higher price.