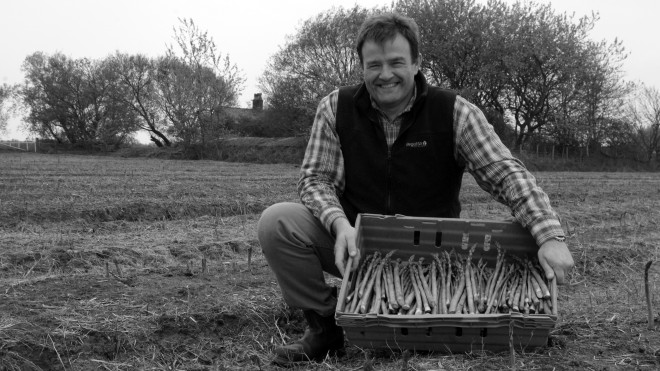 Formby Coast asparagus is a blink-and-you’ll-miss-it crop, both in terms of its brief season and relatively short supply. Its flavour is so celebrated that it would be difficult to forget asparagus completely, but the opportunity to take it home and cover it in butter can be gone in a flash. Our grower Andrew Molyneux says, “The problem with Formby Coast asparagus, and asparagus in general, is that it’s such a short season if you grow traditionally. We stop cutting it around midsummer’s day; folklore says that if you cut it after then, you won’t get any the following year.” Andrew’s crop grows in the light, sandy soil just south of Formby, with a few hundred yards between the spears and the sea. With just 30 acres of local land now dedicated to growing asparagus, the continuation of a long growing tradition here is as precious as April’s first harvest.

Asparagus has always grown wild in the sand dunes around Formby, and the first commercial crops appeared as technology began to develop in the late 19th century. In 2008 grower Andrew Molyneux worked with us to reintroduce a larger crop to the area and believes that the local ‘terroir’ helps to produce a uniquely sweet flavour in the freshly-cut asparagus. “I’ve tried asparagus grown elsewhere in the country and I do think the flavour here is the best,” he says. “It’s the combination of the climate, the soil type and the water availability. There’s a very high water table so we don’t have to irrigate, and it’s virtually pure sand, which asparagus loves.”

Like many growers Andrew reckons that the flavour is best just-picked. “You can’t beat it raw out of the field,” he says, “but we cut it today, pack it this afternoon, and it could be on the shelves tomorrow.” The picking process is done by hand and is especially delicate because if a still-growing spear is damaged below ground, it’s lost. “There was a lot grown at the turn of the last century but because of the cost of harvesting it and economies of scale, people just haven’t been able to carry on. Smaller growers have got out of it, and people supply themselves and have a patch in the back garden.” Those of us without an asparagus patch have a lot to thank Andrew for.