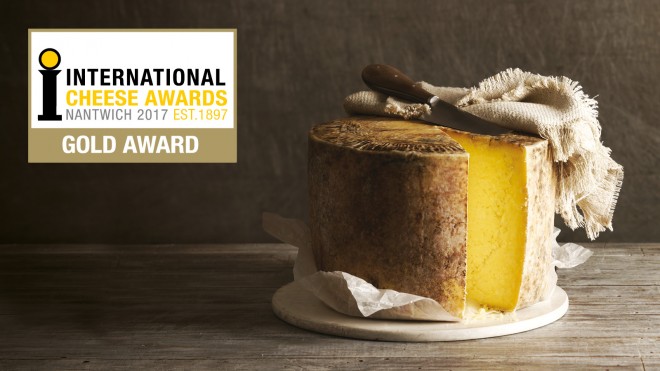 We’re very pleased to say that we performed fantastically well in the Nantwich International Cheese Awards this year, which are one of the world’s most respected of their kind. We gained 16 gold awards for cheese and yogurts, which you can find at our cheesemonger counters in stores or in the fridges. Take a look at the full list of winners below:

The statesman of the farm, Montgomery’s Cheddar is the epitome of traditional handmade unpasteurised Somerset cheddar. Its deep, rich, nutty flavours have won worldwide acclaim. A wonderful addition to a cheese board, served with fruit, chutney and honey. Fantastic in a ploughman’s and a great cheese for cooking.

A young fresh vegetarian cheese, this has yoghurt notes and a crumbly texture making it an ideal cheese to freshen the palate. It is best served with a light drink including apple ciders or it works well with Booths Vouvray.

A perfect accompaniment to an apple pie, served on the side. Also great crumbled over a salad.

Made with ewe’s milk, Pappillon is almost white with distinctive blue veins running through it. It has characteristic flavours of burnt caramel with a notable taste from the blue and green veins providing a sharp tang. It has no rind – rather the outside is edible and slightly salty. The texture is crumbly, moist and almost spreadable.

A fantastic addition to a cheeseboard, used in blue cheese dressings or in salads. Ideal served with a good Bordeaux or Cabernet Sauvignon.

This Cheddar is suitable for vegetarians, and has a fruity and mellow taste. Often has an open texture due to its handmade nature, this Cheddar is a family favourite with a full flavour and a firm silky texture.

Great choices of wine to pair with this are Zinfandel, Cabernet Sauvignon and Rioja.

A Protected Designation of Origin (PDO) cheese, this cheese has a protected status meaning the milk and cheese comes from the West Country and it’s made to a traditional Farmhouse recipe.

With a sweet and milky aroma, this cheese has mature creamy notes. Rich and full-bodied, it has a tangy note on the finish and is suitable for vegetarians.

This cheese is robust and stands up well to a Chardonnay or Rioja. If you wanted to pair it with an ale or beer then Boddington’s beer or Wainwright Pale Ale is perfect. Ideal served as part of a ploughman’s lunch with sourdough or olive bread, or used in a frittata.

Well rounded and balanced, this Tasty Lancashire has a lingering buttery note with a mature sharpness. A smooth cheese, it coats the mouth.

This cheese works well with a strong wine so a Malbec is a great accompaniment. If using in cooking, this is great used in a cheese and onion pie or in a cheesy sauce as the strength remains giving a buttery, rich cheese note to any dish. Suitable for vegetarians.

Winner of Grana Padano Cheese Made With Unpasteurised Milk.

Grana Padano PDO typically has a very thick yellow/reddish-yellow rind, with the centre being a hard white/straw-coloured centre, which is more brittle and has a tendency to crack when cut. It should have a sweet, fruity taste and a buttery aroma with hints of fruit.

For cooking, Grana Padano can be used straight from the fridge as is slightly easier to grate/shave when cold. Ideal for use in pasta dishes. If you are eating as a table cheese or as part of a cheese board, which is common in Italy, remove from the fridge around half an hour before serving. Enjoy with a glass of Champagne, or a stronger pale ale, which will complement the flavour of the cheese without adding too much heaviness.

Winner of Cheddar Made With Unpasteurised Milk.

As a whole cheese, Keens is bound in cloth which creates a natural rund beneath. When cut, Keens is a relatively hard, crumbly cheese that can range in colour from a pale yellow to an off white. It has long, complex, nutty flavours and earthy notes. It can also have slightly tangy hints. It is a smooth and dense cheese and is typical of traditional cheddar.

Perfect as part of a cheeseboard or ploughman’s lunch, and works well when eaten simply with sweet, crisp apple or some freshly baked bread. Keens cheddar goes particularly well with deep ruby port, a glass of rioja or a cold glass of traditional stout or ale.

Winner of two awards, Any Other Hard Cheese made with Unpasteurised Milk – Produced outside the UK and International Speciality Cheese – Hard – Except Blue – Produced in France.

A French semi hard cheese produced in large, flat convex wheels. The rind is natural, thick and is golden yellow to brown colour while the cheese is a pale, golden yellow. The taste is both fruity and acidic. Sweet with a slightly fizzy flavour, it has been likened to fermenting pears. It has notes of wild flowers and hay. It is very creamy and fudge like in texture.

It is particularly suitable for melting in recipes such as gratins, fondues and canapés. It also makes an excellent table cheese served with cured meats and fresh bread. It is perfect with a robust red wine such as merlot or Cabernet Sauvignon.

Winner of International Speciality Cheese – Hard – Except Blue – Made in Switzerland.

The cheese is in the shape of a millstone with a washed and brushed brownish rind like crust and dark yellow paste. It has a complex flavour, fruity at first with a nuttiness that develops on the palate later. It has a dense and compact texture yet still soft and flexible.

Gruyère is traditionally served in a fondue with meats, vegetables and breads. It is excellent for cooking generally as it doesn’t become stringy, so can be used in gratins and for grilling. It is also a great addition to a cheese board.

BOOTHS CLOTTED CREAM WITH BRANDY – AVAILABLE AT CHRISTMAS ONLY

Winner of Flavoured Cream – Cartons of any size that are commercially available.

Winner of Yogurt – Natural – any type – Cartons of any size that are commercially available.

Winner of Yogurt – Berry Based – Cartons of any size that are commercially available.

Winner of Yogurt – Stone Fruit Based – Cartons of any size that are commercially available.

Booths has a reputation for selling fine cheese, and we have laid a great foundation by stocking the very best from our regions in Lancashire, Cumbria, Yorkshire and Cheshire. We have some highly skilled cheese makers here in the North and throughout the UK who make fantastic cheeses ensuring that they reach us at their optimum maturity. Add to that our exceptional cheeses from around the world, many with PDO status, and you have a winning combination!

Booths also have a fantastic team of well-trained cheese counter staff, who ensure they are knowledgeable and passionate about our excellent range of cheeses. Our counter teams are there to point cheese lovers in the direction of old favourites and introduce them to new ones. Keep a look out in store for our 16 gold medallists and be sure to ask our teams for some tips to find your perfect cheese.

Please be aware that some products will only be available in larger stores – if you’re travelling for a particular product, we’d recommend ringing ahead to check it’s available in your store of choice – we’d love to hear from you!