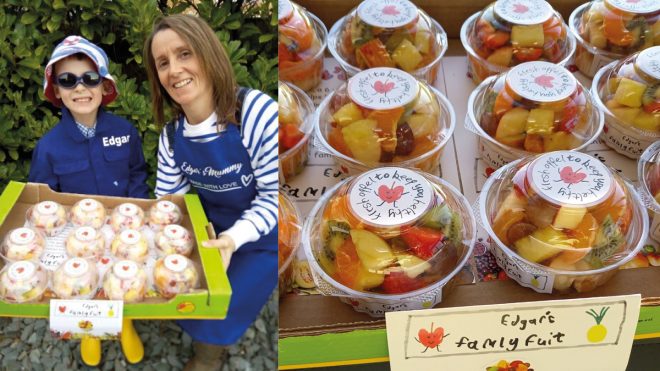 Not many 6-year-old boys write to a supermarket for business advice and even fewer supermarkets would take the time to reply, but this is the story of Edgar and Booths — and Edgar’s brand of fruit snack pots called “Famly Fuit.”

Edgar, now 7, wrote to Graham Booth about his “kitchen table” start-up business called Famly Fuit. Edgar started up in business with his Mum, Jane Johnson, making healthy fruit salads. Edgar’s Mum is on a gluten-free diet, which makes fresh fruit salad the perfect family pudding — “famly fuit” is what Edgar calls it. Edgar was convinced his mother’s recipe should be sold in supermarkets and set about to making it happen.

It all came from Edgar, he thought the salad was so good it was worth sharing and he designed the logo himself, we started packaging it up for local bake sales and farmer’s markets and it just took off.

Interested in how supermarkets make up and retail fruit pots, Edgar wrote to Booths director, Graham Booth, who put Jane and Edgar in touch with Booths fruit buyer David Morris. Initially, the Booths team gave Edgar and his mum a virtual tour of Booths manufacturing (due to Covid restrictions), but the team felt Edgar’s fruit pots might have wider appeal.  David encouraged Edgar and Jane to apply for the “Meet the Buyer” day and after a successful online pitching session, Edgar and Jane struck a deal to supply the fruit pots to stores local to the family in Burscough and Hesketh Bank.

We were really impressed with Edgar’s initiative and entrepreneurial spirit. We’re so used to seeing products, particularly unhealthy ones, marketed to children. Having a healthy nutritious product marketed BY a child, seemed a good turn of the tables and something we might try to sell in our stores.  Anything that encourages children to eat more healthily and encourage an interested in selling top quality food and drink gets a thumbs up from Booths.

Edgar’s Famly Fuit Pots will be available in Burscough and Hesketh Bank Booths from Friday 28th of May.