Le Depart: A Note From Nigel 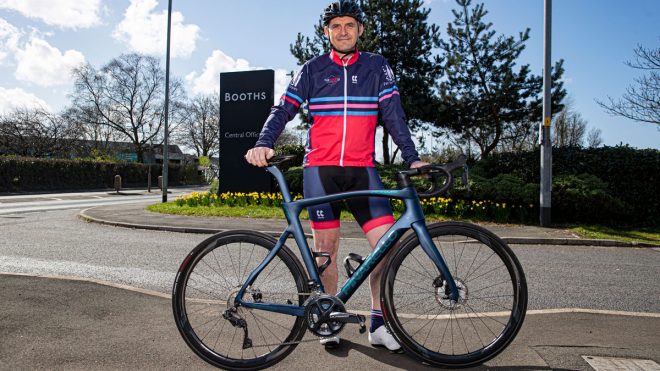 Our COO Nigel Murray is currently taking on The Tour 21 to raise funds for Cure Leukaemia (tap here to find out more). He wrote an update for us just before his departure, giving us a little insight into the journey so far. We’re cheering him on!

3 a.m. on a warm Thursday morning, June 17th when my wife Sue dropped me off at Ferrybridge services on the M62 to rendez-vous with the Tour ’21 team bus for our journey to Portsmouth and fingers crossed, onward to France.

The past few weeks have seen incredible highs, some very difficult uncertainties and for some the lowest point where they have had to accept they can’t take part in the event.  There were due to be 25 riders taking on the Tour de France route and I have only met 2 of them face to face previously.  7 of our number have unfortunately not been able to make the trip. 2 of the team required to quarantine for a full week in France before we start.  There have been many positive messages of support from those who are deeply disappointed at being unable to travel and the fact that the funds raised by them have been committed to the charity leaves me feeling saddened that I haven’t had the chance to meet some more of life’s amazing people.

There have also been some incredible highs.  It is only 3 weeks since we finished the Tour O’ Booths, which has so far raised over £30,000 for Cure Leukaemia.  During that epic week I was reminded that we truly are ‘The Good Grocers’ at Booths.  The way our entire business, including some of our suppliers and customers, pulled together was awe-inspiring. The welcomes we received at sites and stores were amazing and genuinely energising. Across the business some sponsored, some ran, some rode, some supported in buses, vans and cars with others having spent 6 months planning the event. There was an incredible marketing & PR effort all celebrated at the end with a magnificent, and covid-compliant, BBQ at central office.

Then we came down to earth with a crash.  The event was in serious jeopardy following changes made to French border rules in addition to England’s categorisation of France as an amber list country.  The past few weeks have felt like they have existed on a knife edge with uncertainty at every turn. There are a number of people in the UK and in France who have lobbied and agitated to help to get this vital fundraising initiative underway.  There are many to mention but praise must go to Professor Charlie Craddock and a peer of his in France, Professor Mohamad Mohty.  And once we got the go ahead the core team at the charity, Joe, Bobby, Gemma and James (hope I haven’t missed anyone) along with event organiser Andy Cook and his wife Jacqui sprang into action and got the show on the road.

One thing that hasn’t stopped is the relentless drive to raise funds for the charity and I am humbled amazed, delighted and overjoyed that along with friends, family, work colleagues and associates we have now raised over £60k and we still have much to do….

Back at Ferrybridge,  I’m the first on the bus.  I have 30 minutes just to reflect on and appreciate the level of effort that has gone into to reaching even this stage.  My family have been just amazing in their support and I received a wonderful send off with personal T-shirts reading ‘Go Dad’ which I’m not sure was meant to say ‘Just Go Dad’ or a more encouraging ‘Go ! Dad’  ????

I reflect on my personal efforts to get ready, as ready as can be.  I don’t know yet if I’ve done enough but I do know I have done everything I could.  I’ve been keeping fairly detailed records of my training efforts which I know pail into almost insignificance compared to some of my new-found team mates however it has been the best I could do.

I started preparing formally in November 2020, since which time I have :-

I’m incredibly proud of that!

So, in our strikingly wrapped tour bus we wind our way through Knutsford, Birmingham, South Mimms and Cobham picking up more riders and crew as we go onward to our domestic destination, Portsmouth ferry terminal, with Passport, PCR test and Vaccination certification in hand.

I have seemingly stumbled across a new obsession in studying the form of Men’s calves and quickly realise that the Gruppetto will be my home for the next 3 weeks. Unlike the pro teams, it is likely to form very early, most likely from kilometre zero, almost every day.

I generally take on challenges in life with a clear head, plenty of logic and bucket loads of determination, but I am anxious….bordering on terrified.  I have NEVER done anything like this, am I just a stupid old man with some kind of mid-life bucket list obsession ? I don’t know, but right now I am filled with doubt – and just tell myself that it will all feel better when we start pedalling,  “Please let it be ok when we start pedalling…….”

36 hours of travelling later, we arrive in Brest – The first host town.  It’s getting this years Tour de France it is getting more ‘real’ by the minute.  Time to check in, empty the bus of bikes, bags and boxes.  Get ready for some PR shots and then it’s time for a gentle hour out on the bike just to warm the legs up.

Enjoyed that, love the smooth road surfaces and great chatter with the rest of the group.  Back at  the hotel it’s time for a pre-recorded interview with CNN, Yes I know – CNN !!  A wonderful dinner where there are NO limites to calorie intake – just my kind of meal ????. Watched England draw with Scotland, book in for tomorrow night’s sports therapy and no just finishing off this diary update. Despite missing a full sleep on Wednesday night I’m WIDE awake… no doubt 5.45 a.m. will be here before I know it, time for breakfast, cases onto coach and then at 7 a.m. it’s time…..

where on Saturday we start our Tour de France challenge. 18 amateur cyclists will ride the full 3,400 km route over 21 days through some of the most beautiful yet challenging parts of France.

On the Tuesday of our Tour O Booths challenge, we visited the Christie Hospital in Manchester, one of the 12 specialist blood cancer treatment centres in the UK supported by Cure Leukaemia.  It was here that everything fell into place as we managed to catch a few minutes to talk to the medical team and riders we were also joined by the CEO of the charity, James (who cycled the final 2 legs that day) and his driver for the day, Mark.

Mark is not only the long-time best friend of James, he is also the father to 3 children, one of whom was diagnosed with blood cancer late last year.  Mark spoke to the riders at the end of that day in Knutsford store.  His message was simple; whatever you do to help, big or small, ride a few miles or the Tour de France, your efforts are invaluable. Aside from fund raising, which is vitally important, the fact that people are willing to give their own time and effort to support people they very often haven’t met gives those fighting these types of disease such incredible hope and energy. Thankyou to everyone for what you’ve done and what you are continuing to do to support Cure Leukaemia.

So, the next chapter for me started at 3 a.m. on Thursday morning when my wife, Sue, dropped me off at Ferrybridge services on the M62 to rendez-vous with the Tour ’21 team bus for our journey to France where on Saturday we start our Tour de France challenge. 18 amateur cyclists will ride the full 3,400 km route over 21 days through some of the most beautiful yet challenging parts of France, including the Alps and Pyrenees mountain ranges. Our combined objective is to raise over £1m for Cure Leukaemia.  The Good Grocers have done astonishingly well so far but please keep up the great work over the next 3-4 weeks and I’ll keep in touch with our progress through France.

Back in mid July so it’s not goodbye, it’s au revoir!

If you’d like to donate to Cure Leukaemia in support of Nigel, you can do so on his just giving page by clicking here.