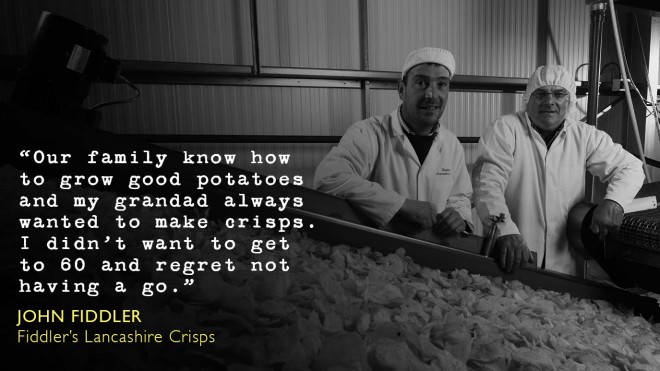 Potato-growing goes back 50 years in John Fiddler’s family, who farm near Ormskirk. But for almost as long, the men of the clan have also wanted to make something with those potatoes. “When I was a little lad growing up,” says John Fiddler, “my dad always told me that my granddad would have liked to have made crisps. When they were picking potatoes by hand in the fields, they used to stop for the bagging, which is what they called their break and a snack. They had a packet of crisps and my granddad used to say, ‘I’ll make crisps one day’.”

Robert Fiddler, John’s granddad, died young and as small-scale farming got tougher, John’s thoughts turned again to salty snacks. “I started thinking about crisps,” he says. “We know how to grow good potatoes. I did some research, and I thought, ‘we’re going to have to do it now, because otherwise I’ll get to 60 and regret not doing it’. I went to me dad and said, ‘Have we to make crisps?’ And that was that.”

Fiddler’s Lancashire Crisps started in 2011, with small batches hand-cooked in sunflower oil by either John, his brother or his dad, who’s known as Big Bob. “Eating the first one was fantastic, you wouldn’t believe it,” says John. “It was like Christmas morning when you were about 10. I still like getting up in the morning and going in the building and switching the fryer on. There’s no better feeling. Especially when you know you’re making a good job of it.”

The range has grown, but Fiddler’s have kept their flavours (such as Lancashire Sauce, Lancashire cheese and onion, and sea salt and Lancashire vinegar) local. Needless to say, they’re all perfect for bagging, in the fields or elsewhere.