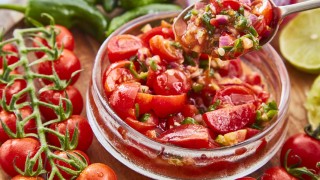 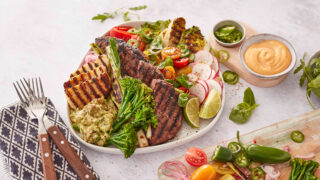 British Tomato Week (as it was then) was established in 2004 by The British Tomato Growers’ Association to celebrate all that is glorious about our wonderful British tomatoes. As there’s so much to appreciate about this wonderful fruit, it’s now been extended to a fortnight, and this year’s celebration falls 25th May to 7th June.

We’re very proud to say that all of our fresh tomatoes in store from about mid-April to mid-November are British, with a wide range of varieties available. One of our longest established tomato partnerships is with growers Croftpak Nurseries, who have worked with us for nearly 30 years. Established in Tarleton, Lancashire just after World War II by the Ascroft family, they still proudly run the business.

British tomato crops are grown in glasshouses, protected from the cold and able to soak up the sunshine. As British growers supply the local market, that means the tomatoes stay on the plant for longer, develop the best flavour and are as fresh as they can be. British tomato growers use natural means of pest and disease control as well as employing some two million bumblebees a year to pollinate their tomato crops, and Croftpak are no exception.

“If I go upstairs I can nearly see Booths,” says Brian Ascroft, who grows the tomatoes we sell at his nursery in Hesketh Bank, Lancashire. It’s a close relationship in more ways than one; in the eighties we took a mutual leap of salad-based faith when Brian started growing long-season tomatoes for us. “We started with a few hundred plants and the following year we put in 6,000,” he says. As our customers’ tastes changed, Brian started to grow vine-ripened varieties and smaller fruit. “The main thing when sourcing varieties is the flavour,” he says. “Everything that’s harvested here is harvested by family members – my wife and two sons work with me – and you live or die by what you produce. I’m proud to say that in the 25 years I’ve been serving Booths I have never had anything returned.”

Brian’s father started growing here after World War II and was suspicious of his son’s innovations. “He died when the first tomato was ripening,” Brian says. “He played hell with me, saying ‘you’ll be growing balls of water,’ but we’ve proved that they’re not balls of water and you get out of something what you put in. People say, ‘how do you get the flavour?’ and I say, ‘if I told you that you’d be as clever as me!’ I do not know but I daren’t change anything. We use biological control and bees to pollinate – spraying is an absolute last resort. And as I’ve said to the lads, ‘if you wouldn’t eat it yourself, don’t put it in the box.’ That’s how we’ve carried on all these years. It’s the way we feel.”

Top tip: never put your tomatoes in the fridge!