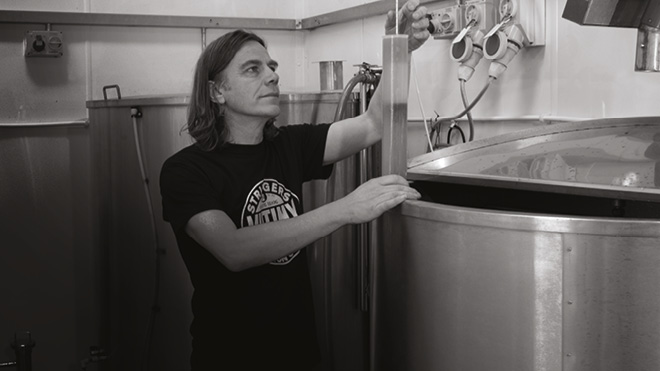 “We were making beer in the kitchen of our flat in Liverpool,” says Jon Kyme. “It got out of hand.” Of course, there’s a bit more to the establishment of Stringers, the craft brewery in Ulverston, than that. “Beer’s the thing we love,” says Jon, a Barrow lad who “dragged” biochemist wife Becky Stringer back to Cumbria to set up their brewery in 2008. Their five-and-a-half barrel plant produces “tiny batches” of beers including a rich amber IPA with flavours of bitter marmalade, and  XB, a best bitter finished with Bobek hops for a fresh, light note.

“We are a small brewer; we like being small and we would rather be small,” says Jon. “Product development is my department. Coming up with something new is fun, but it’s also quite satisfying to brew the same thing and get it right – it’s a challenge.” The brewery, which he describes with a smile as “not a bit picturesque”, is nonetheless as green as the vivid emerald labels on their bottles of IPA. “We have what we call a strong environmental ethos. We’re 100% renewably powered, and we manage our waste. The spent grain goes to a local farmer for the rare breed pigs, and the hops go to local allotment keepers. We’re well aware of climate change and environmental issues and it would be wrong of us not to build that into the business.”

Stringers’ green credentials   – and Jon and Becky’s excellent beers, of course – make them a happy match with Booths. “We like selling beer locally,” says Jon. “With Booths, we’re selling beer to our neighbours, and we like that. We’ve found Booths to be very good to work with, and understanding of the issues of being a small producer. I think something’s going right there.”